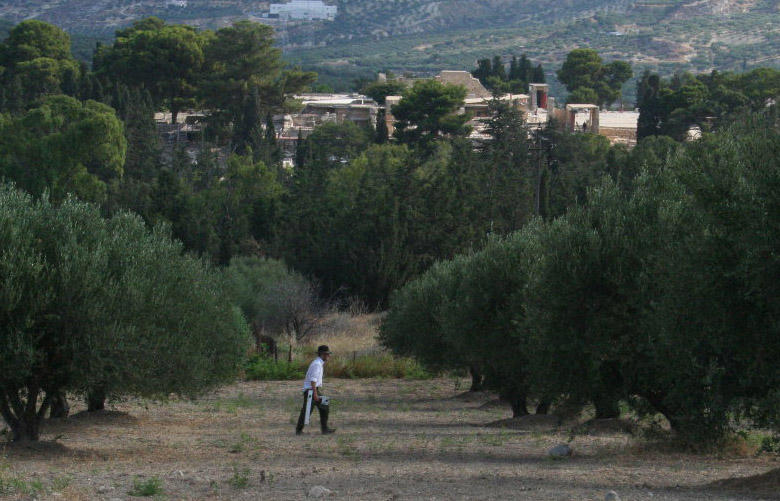 After over a century of continuous fieldwork at Knossos, the Bronze Age town remains perhaps the least understood sector of the site on a large scale. Lower Gypsades Hill, immediately south of the Bronze Age palace (excavated by Sir Arthur Evans) is the ideal location to investigate the Bronze Age urban landscape of Knossos using geophysical techniques, because of the absence of deep post-Bronze Age occupation levels and the likelihood that the area represents the outer suburbs of the settlement, bounded above and to the south by cemeteries. In the summer of 2010 Bennet (Sheffield), Hatzaki (Cincinnati) and Bogaard (Oxford) directed the first phase of geophysical fieldwork over a 14-ha. area of Lower Gypsades. Fieldwork was carried out by a team lead/co-ordinated by Colin Merrony (Sheffield). The project runs under the aegis of the British School at Athens, with a permit from the Ministry of Culture and Tourism of the Greek state, and under the supervision of the 23rd Ephoreia of Prehistoric and Classical Antiquities and the 13th Ephoreia of Byzantine Antiquities. It is funded by the Institute for Aegean Prehistory, the Louise Taft Semple Fund, through the Department of Classics at the University of Cincinnati, the University of Sheffield, the University of Oxford, and the British School at Athens.

The aim of the first phase was to use extensive magnetometer survey to gain a general understanding of the nature and density of sub-urban settlement and define its edges in this region of the overall site of Knossos. Results suggest a 'busy' subsurface landscape, as one would expect relatively close to the palatial centre, further explored through resistivity survey in January 2011. Our ultimate goal is to use our enhanced appreciation of the sub-surface remains on Lower Gypsades to identify areas for possible future excavation.